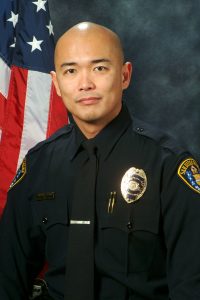 Jonathan Deguzman (affectionately known as JD) was born in the Philippines on September 17, 1972.  He and his family moved to the United States when was a young man in search of the American dream.

On October 2000, he made a big step towards fulfilling that dream.  He joined the San Diego Police Department as part of the 48th Academy.  After graduation, he worked as a patrol officer in the Mid-City Division.  This is one of the busiest and most diverse divisions in San Diego.  While serving that community, JD was stabbed by a suspect during a traffic stop.  He was awarded a Purple Heart for sustaining a life-threatening injury while on-duty.

In 2010, he joined the Gang Suppression Team (GST) as part of his duties.  GST is tasked with trying to stop gang violence and all other gang-related crimes such as homicides, narcotics, assaults, etc.   JD also fulfilled a career goal by becoming a member of the SWAT team.  He showed his persistence and determination after not making the team the first time he tried out.

During his duties as a GST officer, JD was involved in the investigation of a suspect who had been building improvised explosive devices (IEDs) and had set off bombs throughout San Diego.  While trying to arrest the suspect, JD and the rest of his team were involved in a shoot-out with the suspect.  The suspect was armed with a rifle, handgun and several bombs.  For their dedication to duty and heroism, JD and GST were awarded the Meritorious Service medal.

JD, ever the humble person he is, hardly wore the medals he deserved.  Instead, he proudly wore an American flag on his uniform.  When asked why he doesn’t wear his medals, JD said he didn’t want to stand out.

On July 28th, 2016, JD and his partner Wade Irwin were patrolling the southeast area of San Diego.  While trying to conduct a pedestrian stop, they were met with gunfire.  Officer Irwin sustained injuries to his neck.  He is expected to recover.  JD was hit on the torso just a few inches above his bulletproof vest.  He passed away from his injuries.

JD is survived by his parents, his wife, Jane and two children, Jonathan Jr. and Amira.  JD was very much involved in his community.  He was a Sergeant at Arms with FALEO-San Diego Chapter.  JD will be missed and will forever be in our hearts.

On March 6, 2017, a formal dedication was held to rename the Eastlake Post Office located at 830 Kuhn Drive, Chula Vista CA 91914 to the Jonathan “JD” Deguzman Post Office.  Congresswoman Susan Davis and the State Senate approved the renaming to honor the memory of JD.

Since JD’s passing, there have been numerous events that continue to honor JD and the spirit of unity, support and love he left behind.  Events such as scholarships, cross-fit challenges, mountain hikes, and marathons.

I never dreamed it would be me

My name for all eternity

Recorded here at this hallowed place

Alas, my name, no more my face

“In the line of duty” I hear them say

My family now the price will pay

My folded flag stained with their tears

We only had those few short years

The badge no longer on my chest

I sleep now in eternal rest

My sword I pass to those behind

And pray they keep this thought in mind

I never dreamed it would be me

And with heavy heart and bended knee

I ask for all here from the past

Dear God, let my name be the last